Embolisation is a non surgical, minimally invasive procedure in which the blood vessels are plugged with a type of glue to stop the flow of blood to an area in the body/ a tumour so that it eventually becomes necrotic or shrinks the tumour. Under x-ray a catheter is guided from the main artery in the leg up into the area that is to be treated. This is repeated for each vessel that feeds the tumour. NET Patients can often require this procedure to be repeated and so this method is frequently combined with multi modality treatment for NETS.

The embolisation procedure is carried out by a consultant radiologist who would have completed advanced post residency training in interventional radiology. It is most common for patients to have embolisation with little or no sedation, although this depends on the organ that is to be targeted.

A guide wire and catheter is carefully inserted into a suitable artery and guided to the area in question with the help of live images /digital subtraction angiography (DSA) so that the Radiologist can gain access to the correct vessel(s). Once the ‘glue’ is inserted another set of DSA images are taken.

Just like embolisation TACE is a minimally invasive procedure to restrict a tumor’s blood supply using a chemotherapeutic dose directed at the tumour rather than ‘glue’ as above. Again the radiologist would use the same process as above (embolisation) and when the most appropriate blood vessel supplying tumor has been chosen the chemotherapy dose /drug is injected through the catheter. This dose may be given in one vessel or alternatively it can be divided among several vessels that are supplying the tumor(s).

Patients are routinely kept in a hospital for one to two days following the procedure just in case inflammatory chemicals find their way into the blood stream.

RFA is a medical procedure whereby heat made by radio waves are used to kill cancer cells. This electrical current, heats the cancer cells to a point where the tumours are destroyed. Your doctor/consultant may recommend RFA because you may have several tumours or the position of the cancer in your body means that it would be very difficult for a surgeon to do e.g. if it is near a major blood vessel or if you are unable to have a general anesthetic.

First you are given a general anaesthetic (for a large area) or a sedative with a local anaesthetic to numb the area before a probe is inserted through your skin into the tumour itself. You can also have RFA during surgery/laparoscopy and timings can vary however, it usually takes about 30 minutes to treat one tumour.

Pain or discomfort in the treatment area and generally feeling unwell with high temperatures are a common side effect of RFA which you may have for a few days after treatment. Your doctor or specialist nurse will give you painkillers to take home with you and then you will usually be given a follow up appointment for a scan to show how well the procedure has worked.

Microwave ablation is a procedure that uses heat from microwave energy to destroy cancer cells. MWA is used to treat cancer that has spread to the liver from other parts of the body. As with RFA this procedure can be performed during:

Oncology-focused treatment company Sirtex Medical (ASX: SRX) recently announced the start of a new trial to see if chemotherapy used with SIR-Spheres® microspheres targeted radiation therapy, is more effective than just chemotherapy in patients with bowel cancer that has spread to the liver. 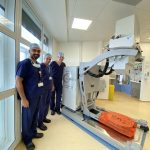