PLANETS were well supported at the Great South yesterday with 13 runners wearing our vests raising over £5000 in total!

The weekend kicked off on the Saturday with the junior races in which we were represented by our youngest runner ever, 6 year old Lauren Davis.  Lauren put in a great performance in the 1.5km race.  With gale force winds predicted for the Sunday, our team arrived nervously anticipating a hard run.  The birds flying backwards were a good indication of the level of wind and didn’t bode well for the final 2 miles which is notoriously tough at the best of times!  The rain stopped as runners arrived on the common though, giving way to blue skies which at least meant the bin-bags weren’t needed for the start line and all of our team set off with smiles on their faces!  The last 2 miles did not disappoint with most reporting back that it was the hardest 2 miles they have ever run in their life!!  Some great times were still recorded and despite being windswept, everyone enjoyed the iconic route round Portsmouth and the fantastic atmosphere that the Great South always provides.  The locals still lined the streets and jelly babies were still handed out on the last mile despite the weather.  We want to say a big thank you to all our runners – Russ Tarley, Joanne Green, Kimmy Douglas, Isabel Carter, Julie Laming, Dave Milo-Jones, Kerry Fourie, Laura Freak, Ali Bolson, Katy Haynes and Lauren Davis for their fantastic efforts in tough conditions and also to all their supporters who also braved the weather to cheer everyone on.  A great day had by all! 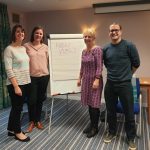