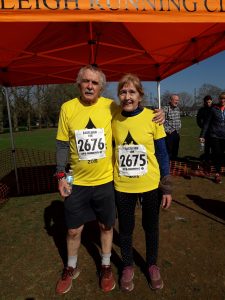 A Southampton man is set to complete the final 55 miles of a 630-mile coastal walk he began with his late wife in 2015 as a tribute to her – and to honour the surgeon who trebled her length of survival from cancer against the odds.

Steve Walklate, 74, from Hedge End, will walk the remainder of the South West Coast Path – England’s longest waymarked long-distance footpath and a National Trail – to raise funds for PLANETS Cancer Charity.  He made the pledge at wife Jane’s funeral in January last year and has set aside three weekends between April and June this year for six walks of around 10 miles each across Devon from Torquay to Salcombe.  Jane was diagnosed with bowel and liver cancer in 2005 at the age of 55 and was taken under the care of consultant hepatobiliary surgeon Neil Pearce who explained that, after a course of chemotherapy, he would operate to remove a number of tumours.  “Mr Pearce emphasised to us the following 12 months of treatment would be gruelling but that he was determined to see Jane at least five years on,” explained Steve, who spoke out ahead of World Cancer Day tomorrow (Friday).

“Because of his skill and her determination, Jane went on not only to survive the bowel and liver operation for five years but also several more major procedures, continually defeating cancer over a 15-and-a-half year period.  A few years down the line, we discovered that Jane’s situation in 2005 had been considered so grave that several other specialists had advised Neil that he was wasting his time – they were wrong and we cannot thank Neil enough for what he did for Jane.”

Jane, a mother of three, continued teaching and tutoring maths to numerous students and was incredibly active after her diagnosis and initial treatment, climbing the Three Peaks – Ben Nevis, Snowdon and Scafell Pike – and completing 107 organised ‘Parkruns’ between 2017 and 2019.  She encouraged Steve to join her on long walking ventures which included the Solent Way, Test Way, South Downs Way, West Highland Way and Cotswold Way before they embarked on the South West Coast Path.  “Initially we travelled by car to starting points on the south coast,” said Steve. “Soon after we arranged four fortnightly holidays – each of roughly 100 miles – starting from Minehead.  By the autumn of 2018 we had reached Teignmouth on our day/weekend trips and Salcombe coming from the other direction, covering around 575 miles in all which was just 55 miles short of completing the trail in its entirety.”

Shortly after this, in 2019, Jane’s cancers returned but were deemed inoperable, although she did embark on another course of chemotherapy which ended just before the Covid-19 pandemic first hit the UK in early 2020.  A few months later Jane’s cancer had spread and, despite undergoing radiotherapy, she died at home on in December 2020.  Steve said: “Jane was truly inspirational and at her funeral in January 2021 I pledged to complete the remaining 55 miles of the trail as a tribute to her, inviting family and friends to join me.  This is our tribute to her and also a very definite thank you to a man and his colleagues who took a risk and provided Jane with 15-and-a-half more years of life.  I and all of those participating with me intend to complete the last section during the first weekend of June which would have been our golden wedding anniversary.  Any sponsorship resulting will go the charity established by Mr Pearce and his team – PLANETS – which among other things aims to fund groundbreaking equipment.”

Jo Green, a neuroendocrine cancer patient and operations director of PLANETS, said: “This event is a lovely way for Steve and his family to pay tribute to Jane and to also thank our charity founder Neil Pearce, something we are extremely grateful for.  Jane’s fight against cancer was truly remarkable and we would like to thank Steve for thinking of the charity as he gets set to embark on the remainder of his challenge along with his family and friends.”

To find out more about Steve’s walk and to donate visit www.justgiving.com/fundraising/steve-walklate.