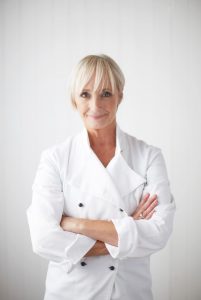 Celebrity chef Lesley Waters has been named patron of Hampshire-based PLANETS Cancer Charity – and will mark her new role with a tasting evening in aid of the charity next week (Thursday, 26 May).

The charity is primarily dedicated to serving the needs of four million people living across Hampshire, Wiltshire, Dorset, the Isle of Wight, the Channel Islands and West Sussex, but it is steadily growing its national profile and influence having now raised more than £1.3 million.

Lesley, who lives in West Dorset, is well known for her regular television appearances on Ready Steady Cook, Great Food Live and This Morning.

She is also a former head tutor of Prue Leith’s School of Food and Wine and author of several cookery books including New to Cooking, Cooler than Chillies, Healthy Food and Deliciously Dairy Free.

Lesley has now established her own cookery school – The Lesley Waters Cook School – in Shaftesbury which offers demonstrations and hands on classes and is also guest chef at White Pepper Cook School.

Lesley’s offer to become patron for the charity came after finding out about its connection with the family of Karen Ford, a keen cook who had previously worked with Lesley and sadly passed away 18 months ago after a long battle against pancreatic cancer. 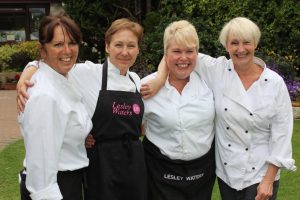 Karen had donated to PLANETS and attended events including the Millionaires’ Ball in 2019 after being treated by members of the charity’s clinical team at University Hospital Southampton.

Lesley had initially agreed to support PLANETS when approached by a supporter, Naomi Estall, at a food festival, having no idea of the link with Karen until PLANETS director of operations, Jo Green, recalled Karen’s story and that she had mentioned working with Lesley.

When Lesley was informed she immediately called Karen’s widow, John, and firstly suggested hosting a tasting event on behalf of the charity in Karen’s memory before also offering to become a permanent member of the PLANETS team.

“It is an absolute honour for me to become patron of this truly amazing charity which has already done so much for its patients and continues to grow and expand to help many more people and families dealing with a cancer diagnosis and its consequences,” said Lesley.

“There was something that immediately signalled to me I needed to be involved with this organisation from the moment it was mentioned to me and, given all of the previously unknown connections, it is just fitting that I can do this on behalf of Karen and so many others.”

She added: “I am really looking forward to being involved and helping in any way I can, starting with my tasting evening this month and hopefully through many more events and activities in the coming months, as well as being a strong advocate for PLANETS whenever the opportunity arises.”

Layla Stephen, chief executive of PLANETS, said: “We cannot express how grateful we are to Lesley and to those who played a part in helping to bring her to PLANETS – Naomi, John and Jo in particular.

“Lesley has already demonstrated to us how passionate she is about patients, our charity and our supporters and she will be an excellent advocate for us, as well as a lifelong supporter now herself, and we are extremely excited about what the future holds for this partnership.”

The PLANETS Cancer Charity tasting evening with Lesley will take place at The Pythouse Kitchen Garden in Tisbury, South Wiltshire next Thursday (26 May) from 6pm to 10pm and will include a welcome drink, an exclusive demonstration by Lesley, a three course tasting menu, a raffle and auction and live music.

There will also be an address from Dr Brian Stedman, consultant interventional radiologist and co-founder of PLANETS. The last remaining tickets are available to purchase on the PLANETS website at https://planetscharity.org/product/lesley-waters-dining-evening/. View Lesley’s Facebook page here.